For many years we have been supporting orienteering in Germany as a sponsor or in personnel form. The young generation is especially close to our hearts. Especially in view of the current circumstances, it was therefore natural for us, after a short request by a school, to take a half-day off work and organize an orienteering event for almost 50 school children in the heart of Dresden.

The Hechtviertel in Dresden is analogous to the neighboring Dresdner Neustadt a neighborhood with inhabitants of the most different income and age groups as well as countries of origin. Countless families and children characterize the cityscape. The Hechtpark serves as an oasis of calm and a running area for numerous runners.

On Thursday morning, orienteering control points were distributed in a part of the park without further ado. The youngsters, aged 12 and under, were then given the opportunity to start out on two different courses using an electronic chip and a map - many children for the first time in their lives.

The fun and joy of the movement was visible to most of the children. Almost all children ran three times in total. Some of them collected the control points afterwards.

Later, a short award ceremony was held by the teachers. Many children had a sense of achievement just by finding the control points and running the course correctly.

From our point of view it was a successful event for all participants. 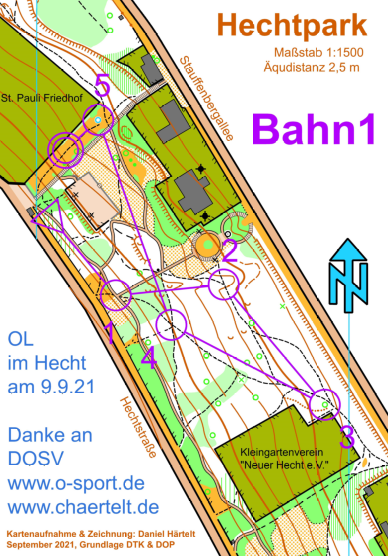